Houston, TX — Jared Vanderaa has been somewhat in awe of his UFC 271 opponent heading up to the fight.

Vanderaa (12-6) is paired up with the seemingly ageless Andrei Arlovski this weekend, a former UFC heavyweight champion who is among the last of his era.

“I’m just still fangirling inside. I mean, I get to fight Arlovski,” Vanderaa told media outlets including Cageside Press during this week’s media day. “So I’m like ‘oh my god, I get to fight the Pitbull.'” Fight camp has been harder, admitted Vanderaa, because “I am a fan and fangirling way too hard. Like ‘I’m going to beat his ass out of respect!'”

When Andrei Arlovski made his pro debut, Vanderaa was all of six years old. Of course Vanderaa is well aware that the fighter he watched as a teen will now be standing across from him in the octagon come Saturday night.

“Yeah, the dude’s kind of old, no disrespect. He’s what, 43 now? But the dude’s also whupping people’s asses still,” Vanderaa noted. “So you gotta respect the guy’s skill, regardless of his age.”

Thus far, “The Mountain” has had a couple of rough nights under the UFC banner. A Fight of the Night win against Justin Tafa is sandwiched between two losses, to Moldovans Sergey Spivak and Alexander Romanov. When it comes to being consistent, Vanderaa suggested the key was to “stop fighting wrestlers, or people from Moldova. I think that’s a strong case right there, if you’re from Moldova, just kind of move along. Thank god I got two of the three fighters from that country out of the way.”

“I think one of the biggest things was just getting in my head about ‘oh my god this guys are great wrestlers,’ realizing my coach is also a D-1 wrestler who has basically been holding me against my will and doing things that I tell him no to all the time. And he’s a better wrestler than those guys, no offense to them.”

And so Vanderaa has been trying to improve his wrestling, calling it “an obvious hole in my game.” And he wouldn’t be surprised if Andrei Arlovski tries to exploit that.

“If I was him, I would try to wrestle me. It’s a blatant hole in my game, like ‘hey, his wrestling defense is trash, how bout we shoot on him?’ Makes sense to me,” Vanderaa stated. “But if he wants to stand and punch me, by all means. I’m a lot better in the striking department than people give me credit for.”

Watch the full UFC 271 media day appearance from Jared Vanderaa above. More coverage from the event can be found below. UFC 271 takes place Saturday, February 22, 2022 at the Toyota Center in Houston, TX. 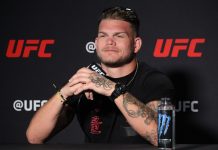 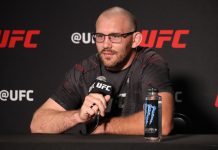