The debut of “Blood Diamond” finally arrived on Saturday night, early on the UFC 271 card.

A teammate and training partner of Israel Adesanya, Diamond (properly Mike Mathetha) went up against Jeremiah Wells, who stepped in to replace Orion Cosce.

Wells started off the fight running along the cage and slipped awkwardly. Diamond rushed forward to capitalize but Wells clinched him up. Wells worked hard for the takedown for a good while and eventually got it. Right away Wells moved to the back and started to threaten the rear-naked choke. Diamond, not being able to move, was able to fight the wrists of Wells. Wells more and more started to land ground and pound. It opened up the neck and Wells attacked again. Diamond lasted longer than you might have expected, given the lengthy stretch of time Wells was on top and in mount. But it wouldn’t last forever. The last time he was able to open things up and get under the neck, he would put Diamond to sleep.

Not the debut the City Kickboxing fighter was looking for. Wells, meanwhile, earned his second straight win inside the octagon. 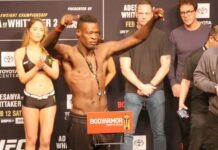