Welterweight newcomer “Blood Diamond” — a.k.a. Mike Mathetha — has a new opponent for UFC 271 next month.

With Orion Cosce previously announcing that he was out of the fight, the teammate of Israel Adesanya at City Kickboxing will now face Jeremiah Wells as part of the event on February 12, 2022.

Eurosport was first to report the news, with Wells later confirming the report on social media.

Wells (9-2-1) had been scheduled to fight Tim Means on February 5. It’s unclear whether Means will stay on that card, or be rescheduled with a new opponent at a later date. Currently riding a three-fight win streak, Wells made his own promotional debut last time out, defeating TUF: Brazil 3 winner Warlley Alves.

Blood Diamond (3-0) is one of the more unique UFC debuts of late, mainly due to having just three pro fights to his name. In MMA, that is. Counting kickboxing and other combat sports, the New Zealand native has been in over 100 professional fights.

That said, the 31-year old last competed in MMA in 2020, winning a unanimous decision over Dimps Gillies under the Eternal MMA banner.

UFC 271 is set to take place at the Toyota Center in Houston, Texas on February 12, 2022. The following bouts have been reported for the card to date: 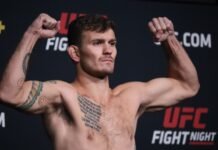