“The Mongolian Murderer” will be looking for his first win inside the UFC octagon when he takes on Cameron Else in April.

Aoriqileng (19-11) will face Else (10-5) in a bantamweight match-up as part of the UFC’s April 23 Fight Night event. Cageside Press confirmed the booking following the bout being announced by Else’s management firm, Iridium Sports Agency.

China’s Aoriqileng has lost his first two fights with the promotion, dropping a pair of unanimous decisions to Jeff Molina and Cody Durden at flyweight. The Durden fight in particular sparked controversy, with the American saying post-fight that he had to send his opponent “back to China where he came from.”

The Chinese fighter later responded by calling Durden a “coward.” He’ll have a new foe in his sights come April, however. And he’ll be returning to bantamweight, where he competed prior to joining the UFC last year.

England’s Else will likewise be looking for his first win in the promotion. Debuting at UFC Fight Island 4 in 2020, Else lost via TKO to Kyler “The Matrix” Phillips. Though scheduled for a bout the following year with Aaron Phillips, Else was forced to withdraw, and did not compete at all in 2021.

The UFC’s April 23, 2022 Fight Night event does not yet have an official location, venue, or broadcast plan announced. Currently, the following fights have been reported for the card: 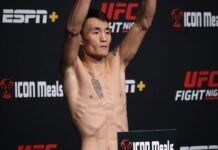 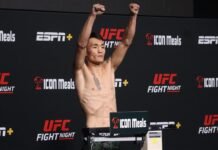 UFC: Aoriqileng Plans To Stay At Bantamweight, Regrets Not Making The Move Sooner