Entering his third fight inside the octagon at UFC Vegas 46 and looking for his second win inside the promotion, Ramiz Brahimaj was looking at a step up in competition against Ultimate Fighter winner Court McGee.

McGee, now over a decade removed from winning TUF 11, had the edge in experience to be sure. Both men, however, were coming off single wins and hoping to put together modest winning streaks.

McGee tried to get the fight to the mat early, shooting for a takedown in the opening minute. Brahimaj did a good job defending for a bit, but eventually, McGee slammed him down and wound up in half guard. Brahimaj defended well and worked his way back to his feet, and the two men began trading. In the final seconds of the round McGee hurt Brahimj and dropped him hard. However, time soon expired, and Brahimaj was saved by the bell.

Brahimaj came out shooting for his life to start round two. He got a quick trip takedown but was soon reversed and taken down by the veteran. Brahimaj worked his way back to his feet once again, but was getting worked on the fence. The veteran was giving him no room to breathe, and forcing him to fight in the clinch. Brahimaj was taken down once again to end the second round.

McGee continued his dominant outing in the third and final frame. Brahimaj grabbed onto a panic guillotine choke while McGee scored a takedown, and the veteran predictably worked his way out. Brahimaj was being suffocated in the ground, and McGee began hunting submissions. First missing out on a rear-naked choke, he then looked for an arm-triangle choke which he also couldn’t get. Brahimaj claimed a moral victory by not being choked out, but there was no doubt as to who won the bout when it went to the judge’s scorecards.

McGee said after the fight that a neighbor had suggested he create a “stage character” for his fights — and he’s done just that, being “The Crusher” in his last two outings, winning both. 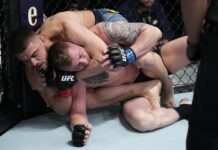 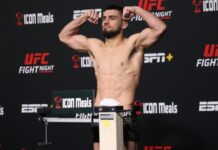