Las Vegas, NV — Joanderson Brito plans on getting a Performance of the Night bonus in his UFC debut.

Brito (12-2-1) makes his promotional debut this Saturday at UFC Vegas 46. He kicks off the main card in a featherweight bout against Bill Algeo. The Brazilian received a UFC contract on season five of Dana White’s Contender Series when he defeated highly touted Diego Lopes via a technical decision. Brito is riding an impressive 11-fight win streak and has only been to the judges twice in his 12 wins. He comes to finish his opponent every single time.

In an exclusive Q&A interview with Cageside Press via e-mail, Brito talked about his win over Lopes, his upcoming UFC debut, and what he wants his 2022 to look like.

To me, it’s everything. I have yet to fully take it all in, but it’s sensational.

I think it was a good performance; he was a tough opponent, I had been preparing for someone different, so I had to adapt. It wasn’t my best performance, but I knew I would do everything to get away with the contract. I’m looking forward to the next ones and to fight more often.

I felt a little bit rusty out there, but I never stopped training since my last fight before that, and I believe it helped me get the win.

I didn’t. Me and my team started studying him after we were offered the fight. Our job is to be ready for everyone, so it doesn’t change anything.

I think we match up pretty well. And he already has a few fights in the organization, so it’s a good test to show where I belong.

I’m going to put the pressure on him from beginning to end; I’m very confident in getting a performance bonus for this fight.

It’s starting well with me fighting on the first show of the year. I’d love if I’m able to fight four times before the year is over; I hope I can get to fight on the Brazil card in March too.

Joanderson Brito faces Bill Algeo at UFC Vegas 46 (UFC on ESPN 32) this Saturday, January 15, at the Apex in Las Vegas, Nevada. The card airs live on ESPN in the U.S. 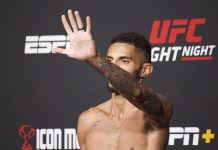