Cub Swanson wants a fight with Urijah Faber, and he might just get it.

Last month after his win at UFC Fight Night: Lewis vs. Daukaus, Swanson called for a fight with the “California Kid.”

During his post-fight interview with the media, including Cageside Press, Swanson said he would love to fight in Palm Springs’ new arena before he hangs up his gloves. When asked who he would like to fight, he quickly gave his answer.

“Probably Urijah Faber, you know, see who the real king of Cali[fornia] is,” Swanson said.

“Cub Swanson, who directly afterward in the press conference said his dream fight would be against yours truly. He wants to drop to 135, and honestly, I know he broke his hand, and that might give me enough time to train if he drops down to 135. We were supposed to fight back in 2004 with King of the Cage on short notice for $1000 bucks, but that never happened. Cubby, I’m honored that I’m your dream fight in this scenario, so we fight out who the king of California is,” Faber said.

In December, Swanson got back into the win column by defeating Darren Elkins, a member of Team Alpha Male. He has won three of his last four.

Faber has been out of action since his TKO loss to current bantamweight champion Petr Yan. Faber retired in 2016 after a unanimous decision win over Brad Pickett but returned two-and-half years later and knocked out Ricky Simon in 46 seconds. 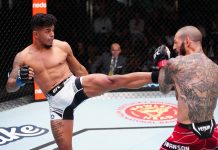