After seeing their fight fall through at UFC Vegas 45 last month, Raoni Barcelos and Victor Henry have a new date.

The bantamweight bout, scrapped due to Henry testing positive for COVID-19, will now take place at UFC 270 on January 22. The promotion recently added the match-up to the event’s official fight card.

Victor Henry (21-5) will be making his promotional debut in the fight. The 34-year old California native trains under Josh Barnett, and previously competed for Japan’s RIZIN Fighting Federation. In his last bout, under the LXF banner, Henry defeated former UFC fighter Albert Morales by submission.

Barcelos (16-2), also 34, had a nine-fight win streak snapped by Timur Valiev in his last outing. The loss marked his first defeat inside the octagon. The Brazilian is a former RFA and Shooto featherweight champion, but dropped to 135lbs in 2018 and has remained in the weight class since.

UFC 270 will take place on January 22, 2022 at the Honda Center in Anaheim, California. The following bouts have been reported for the card thus far: 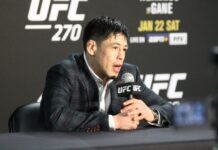