The final week before the Christmas holidays arrive brings with it a couple of cards worth taking note of. Among the MMA prospects in action, heavyweight kickboxer Kirill Kornilov and CFFC flyweight Phumi Nkuta. The good news for a lot of these fighters — getting their work in before the holidays means no weight cut after! Let’s get to it with this edition of the Weekly MMA prospect report.

Kuse is a young fighter with a lot of promise. On the feet, Kuse fights at distance with kicks and long punches. He’s just as good as a wrestler as he is a striker. Kuse has been dominant in top position and is smooth in transitions. His ground and pound is arguably his best weapon. He’s well-rounded but needs a step up in competition. Kuse fights Sal Guerriero (4-1) who is a decent step up.

Why is Taylor’s nickname The Postman? That’s because he delivers. A product out of Sanford MMA, Tayor is someone I have high praise for. With one sole loss as a pro, it was to Bellator’s Roman Faraldo so no shame in that. On the feet, Taylor fights long very well and the striking he has is really crisp. He’s a big strong welterweight slinging and powering guys down to the mat. Taylor has some solid ground and pound and a good ground game all around. His only concern is his takedown defense and fighting off his back but at 24 the sky is the limit. He fights Marcus Edwards (13-5).

Omarov is an undefeated Russian that is all action from start to finish. He’s an excellent wrestler and he strikes well to wrestle. He’s always moving and always throwing to break his opponents down. Omarov has a solid gas tank and with the constant forward pressure, it’s very impressive. He fights Dzhikhad Yunusov (19-5).

Gordeev has shown he is a promising prospect, beating four undefeated fighters, former UFC fighter Mickael Lebout and Shane Campbell, and other solid competition. Gordeev is mainly a striker who loves to use the jab often. The Russian has good long straight punches and his speed can be a real factor. Gordeev has also shown the ability to land at a high rate as well. His wrestling is decent enough to be effective with good scrambles and an active ground game. He fights Mukhamed Kokov (16-7).

With a winning streak over the likes of Mark Abelardo, Gary Mangat, Frans Mlambo, Felipe Efrain, Louie Sanoudakis, and Elias Boudegzdame, Lomas has certainly proved impressive. Loman has a background in Wushu Sanda. On the feet, he isn’t too effective but he has power and timing. He has excellent level changes and once on the mat, he is in his world. He thrives in transitions and his seven decision wins prove he can fight his fight for three to five rounds. He fights Yusup Saadulaev (20-5-1).

Nkuta is only 4-0 in his pro career but has looked apart and his wrestling, grappling, and cardio are the reasons for his career thus far. Longo And Weidman MMA has refined Nkuta into such a good fighter. He defends his flyweight title against Jason Eastman (7-3).

*Also, for the CFFC 104 card keep an eye on Miles Lee, Blake Bilder, and Earl Small. All young pros with a lot of potential.

Smirnov is a dangerous guy who is well-rounded. On the feet, he’s technical with his hands always throwing in twos with big power. He will throw combinations up to four strikes. Smirnov is always throwing a lot of output and has multiple weapons including front kicks, body kicks, knees, and elbows. Everything he throws is with fight-ending intention. Smirnov has strong wrestling and smashing ground and pound on top. He fights Yasubey Enomoto (22-12).

In the last few years, Kim has only lost one fight. That loss was to now current UFC fighter Arman Tsarukyan. Now Kim is on a four-fight win streak. His sole game plan is to get the fight to the mat and to do so he cuts off the cage well and executes some good wrestling. In the grappling department, he is tactical using submissions to move to dominant positions. Kim is a good submission threat and has fight-ending ground and pound. He fights Timur Nagibin (18-6).

Kornilov has a kickboxing background but in his MMA career, it’s the hands that he has got the job done with. He has a really good jab and uses a lot of feints to produce openings for him to exploit. Where he is most effective is when his opponents come forward, catching them as they come in. He’s a dangerous guy off his back foot, so not someone you want to advance on carelessly. He fights Sultan Murtazaliev (8-4-1).

Maslov is a dangerous athletic striker who has a lot of pop behind his punches. He’s also very fast with his output and overall has good hands with a key uppercut he loves to throw. His takedown defense is a concern but age is on his side and he’s been fighting good solid fighters. Maslov hasn’t fought anyone with a losing record to date. He fights Eder de Souza (19-7).

Santoro from Roma, Italy is an IMMAF European silver medalist. He’s one of the most promising prospects out of Italy. He’s a submission grappler with a strong wrestling base. He hasn’t turned the corner yet in his career needing a step up in competition. He fights Oleksii Kryvets (3-0).

The Croatian has beaten some stiff competition over the years. For a long time now Soldic is considered as one of the best welterweight prospects outside the major promotions. Soldic is always coming forward and always looking for the finish. He has heavy hands and a very accurate head kick, which he has dropped so many opponents with. It’s the constant volume he throws that allow him to do so well. He’s always throwing punches behind kicks and vice-versa. Soldic is the real deal. He will fight champion Mamed Khalidov (35-7-2) in an attempt to become double champ.

Parnasse is an amazing talent who has a bright future in MMA at only 24-years-old. Parnasse would prefer to keep the fight on the feet where he can use his effective movement and a good kickboxing base. On the feet, he does a good job of moving in and out and really loves to attack with leg kicks, which set up his strikes better. One of his best attributes is his cardio as he can fight at the same pace for three rounds, which often puts him above his foes. Parnasse has five wins by submission, all coming via choke, so he is well-rounded in all areas. He fights Daniel Torres (12-4) who he lost to before.

Legierski is well-rounded but is better on the feet. He has a heavy right hand throwing the overhand and right cross. He fights in bursts exploding forward with three-strike combinations usually. He throws a good right kick to the midsection and is good at attacking the legs of his opponent. Legierski has some background in kickboxing too which explains the commitment to his kicks. He really doesn’t have much wrestling technique but has the strength to just bully guys down. He fights Roman Szymański (14-6).

Not an appealing record but since losing his debut Nedoh has won three in a row. Known as a submission specialist his last fight proved that he has some knockout power. Nedoh is a good wrestler and a strong submission grappler. There is still a lot Nedoh needs to prove though being so young in his career. He fights Zvonimir Kralj (7-4). 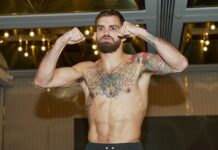 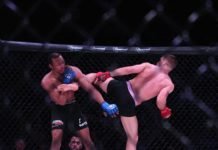 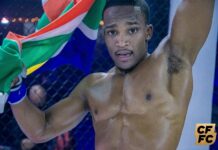