Garbrandt most of all, no doubt. But in this particular case, you can’t say Kara-France (23-9, 1NC) didn’t warn his opponent.

“I visualized this. I knew the finish would come. Cody didn’t take me serious,” Kara-France told media outlets including Cageside Press, speaking back stage at the T-Mobile Arena following his finish of the ex-bantamweight champ. “I told him all week, at media, I said ‘don’t worry about Sean [O’Malley], worry about me.’ And he just brushed it off. He said ‘what am I worried about you for?'”

Garbrandt did, in fact, spend a good portion of Thursday’s pre-fight press conference jawing with bantamweight star O’Malley, despite making the move to flyweight against Kai Kara-France. That seemed to light a fire under the Auckland, New Zealand-based fighter.

“I feel like he didn’t respect me as an opponent. He told me ‘you beg for this.’ I had a point to prove tonight,” exclaimed Kara-France. “Bantamweights can’t just drop down to flyweight and think they can bully us. With all the momentum now, two first-round knockouts, taking out a former champ, I feel like it’s my time.”

It’s clear that gold is the focus for Kai Kara-France; he later told the press that he’d wait for the title shot. Should his wish be granted, the City Kickboxing fighter believes he’ll be facing Brandon Moreno, who he expects to come out on top in a trilogy fight with Deiveson Figueiredo early next year.

“I think I made a statement tonight, taking out a former champ,” Kara-France said. Calling it a great story, he recalled facing current champ Moreno three years ago. “It was a close fight, he’s done well since then, he’s improved a lot but so have I. The other fighters who were ahead of me in the rankings, they’re not here tonight. I’m here. It was my show tonight. I feel like I’ve leapfrogged them, and I’ll be next in line for the title shot.”

Watch the full UFC 269 post-fight press conference with Kai Kara-France above. More coverage from the event can be found below. 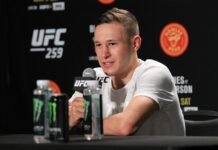 Kai Kara-France: For the Good of the Division