Las Vegas, NV – MMA fans may think that his opponent is on the downslope of his career but UFC bantamweight Pedro Munhoz does not believe that Dominick Cruz won’t be as dangerous as ever when they square off at UFC 269 on December 11th.

Speaking to the media on Wednesday, Munhoz spoke on what Cruz brings to the fight and whether or not he thinks the former UFC champion has taken a “step down”.

“I don’t think so. A lot of people was saying that when he had the huge knee surgery and that he came back and did a hell of a fight with TJ Dillashaw, 5 rounds. I actually watched the fight live in Boston. You know, he’s not a joke man. The guy is always training. He’s always getting better. We’re probably kind of like the same age so I don’t underestimate never any of my opponents. The mindset that I come into the fight every single time that I know he’s going to be the best version of himself and so do I. That’s the reason that makes the biggest fight and that’s what I like to do. Push the button so we can make an interesting fight,” Munhoz said.

Munhoz (19-6) is coming off a decision loss to former UFC featherweight champion Jose Aldo at UFC 265 which may make this fight even more important moving ahead in the title picture.

“I’m always looking for the win. But we’re talking about the champion leagues of fighters. I never come right here like ‘Oh I’m gonna just fight and that’s ok if I don’t win.’ No that’s not the spirit, that’s not the mindset. My mindset is always to come and bring the W. Even though sometimes I couldn’t be able to do it but I’ll always looking forward to finishing my fights. I don’t even like to go to the judges. I’ve had some bad experiences in the past, fights that I thought that I clearly won. Stats shows that I won, so I don’t trust. So I go for the kill always.”

Pedro Munhoz will take on Dominick Cruz at UFC 269 at T-Mobile Arena in Las Vegas, NV on Saturday Dec. 11th.

Watch the full UFC 269 media day scrum with Pedro Munhoz above. The event takes place this Saturday, December 11 at the T-Mobile Arena in Las Vegas, NV. More coverage can be found below. 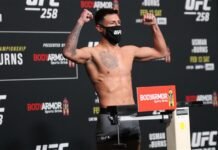