Garbrandt (12-4) sees the move to 125 pounds as a necessary move for his career moving forward in the UFC.

“You know we’ve been going back and forth on it, it’s been on my mind. I’m a doer. When I say I’m going to do something, I’m gonna do it. We were slated to fight (Deiveson) Figueiredo over a year ago. Obviously COVID, caught COVID pretty bad. But I truly believe everything is on timing. It allotted me the time to do this correctly,” Garbrandt told the media at UFC 269 media day.

“It’s been very inspiring. I think that’s the word this week. I’m inspired. I’m inspired for what’s about to take place on Saturday night. New division, end of the year, great card against a good opponent. A worthy adversary and i’ve done everything I needed to do to collect this win.”

Garbrandt described what it was like to compete at 135 pounds competing against guys who were naturally bigger than he is.

“I feel like this is probably my more natural weight. I feel like a lot of the bantamweights are much larger, and I feel like not skill set, speed, power, I still have that at the division obviously. I would say it’s the recharge. The recharge from cutting down to 35 then reload. A fighter’s only gaining 10 pounds and your opponent’s gaining 20 pounds, well they’re taking 10 more pounds inside that octagon and that can make a huge difference. Specially in a 5-round fight. I fell like this has been a necessary cut or a necessary transition to the flyweight division for quite some time. This needed to be done.”

Current UFC flyweight chamopion Brandon Moreno is slated to defend the belt against the man he took the belt from in Figueiredo at UFC 270 on January 22nd in Anaheim, CA. Garbrandt has no qualms about being a backup for that bout.

“I told Dana while I was speaking to some media prior to coming here, I said, ‘We might, you know, on Monday morning walk into the offices and do some business. So if that’s what they want me to do, like I said first and foremost I’m focused on Kai Kara-France and mauling him on Saturday night and letting the rest fall into place.”

Watch the full UFC 269 media day scrum with Cody Garbrandt above. The event takes place this Saturday, December 11 at the T-Mobile Arena in Las Vegas, NV. More coverage can be found below. 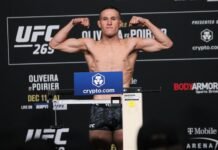