Las Vegas, NV — It took Charles Oliveira ten years to get to his UFC title, but despite that journey, his goals haven’t changed — and the time frame doesn’t seen to concern him.

“We continue to battle. Things are not on my time,” Oliveira said Wednesday ahead of his return at UFC 269. “God says it’s time.”

This Saturday, Oliveira will make the first defense of his lightweight title, against Dustin Poirier. That’s an opponent Oliveira knows is “a tough fighter.”

“We understand he’s a tough, complete fighter. Very strong in his boxing, brings a lot of wrestling, and everyone knows he likes to take fights to five rounds,” observed Oliveira. “But I care about what I can do, and about what we can bring to the game, and that’s what we’re going to do— continue. What matters is what I can do in this fight.”

Oliveira, after all, is used to tough fighters. He knocked one out to claim the lightweight title, in the form of Michael Chandler. That KO was a message, Oliveira said Wednesday. “It was a message to the division. I knocked a guy out [with my] left hand. You saw what happened, you saw what happened at the start of the fight, turned it around.”

“I sent a message: I can do it all, and I’m a complete MMA fighter.”

Oliveira believes he has proved himself as a champion, thanks to nine straight wins, a record in bonuses, and the UFC’s submissions record, among other accolades. He was also ready to respond to Justin Gaethje, potentially next in line for a shot at the lightweight belt, claiming Oliveira is a quitter.

“You’ve got to laugh. You’re talking about one of the guys [Chandler] with the heaviest hands in the UFC. And [Gaethje] fought him, and he didn’t [finish him]. I knocked him out with a left hand,” retorted Oliveira. “All you can do is laugh, and say these guys just want to talk. They just want to sell the fight, and he might have a chance. If he fights me, he’s going to find out if I do not have heart, or what.”

Watch the full UFC 269 media day scrum with Charles Oliveira above. The event takes place this Saturday, December 11 at the T-Mobile Arena in Las Vegas, NV. More coverage can be found below. 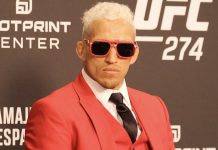