On Friday, Paradigm Sports management revealed that their client Hadley will be fighting Francisco Figueiredo on March 19 at a yet-to-be officially announced UFC event. Both fighters would later confirm the booking.

Figueiredo (12-4-1) went 1-1 in 2021. In January, the Brazilian fighter won his UFC debut against Jerome Rivera, winning the fight via unanimous decision. Six months later, he would lose a unanimous decision to Malcolm Gordon at UFC Fight Night: Makhachev vs. Moisés. The younger brother of Deiveson will look to get back into the win column.

The UFC’s March 19, 2022 event does not have an official location, venue, or broadcast plan announced. There are rumors the UFC will be going back to London, but nothing official has been announced. 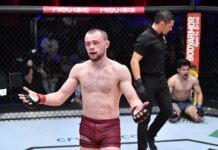 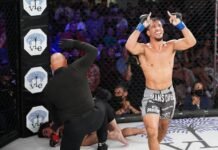