There’s only one problem: Miele is no longer with the promotion. The longtime featherweight has a fight booked in St. Catharines, Ontario against Sarah Kaufman this weekend at BTC 13.

Promotion officials confirmed to Cageside Press that Miele will be removed from the rankings, but for now, she remains in the #7 slot. In fact, she actually climbed two spots in the featherweight division in Tuesday’s update. That saw Talita Nogueira drop below her.

Sinead Kavanagh, who was just knocked out by Cris Cyborg at Bellator 271, dropped to the #6 spot in the division.

Bellator’s rankings are voted upon by members of the media, including a representative from Cageside Press. Tuesday’s update saw heavyweight Linton Vassell move up two spots to #4 in the division following his win against Tyrell Fortune at Bellator 271. Steve Mowry, who was also victorious at Friday’s event, moved to #6 at heavyweight. 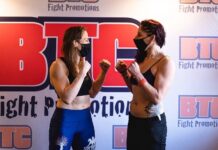