The UFC Vegas 42 card has taken a late hit.

This weekend’s event was to see Kyle Daukaus (10-2, 1NC) face Roman Dolidze (9-1) in a promising middleweight fight. However, due to COVID-19 protocols, the fight has been removed from the card.

The issue appears to originate in Dolidze’s camp, and due to the close proximity of the event, a replacement fighter will not be sought.

This is the second hiccup Daukaus has seen in regards to the bout. Initially, he was expected to face Kevin Holland in a rematch of the pair’s UFC Vegas 38 meeting last month. That fight ended in a No Contest due to an accidental clash of heads.

With plenty of eyeballs on the rematch, it was to be a big part of the UFC Vegas 42 card. However, Holland suffered an injury in training, forcing him out.

Dolidze then stepped up, looking to make it two in a row after his win over Laureano Staropoli in June.

There’s no word on whether the UFC might book the bout for further down the road, or perhaps go back to the original Daukaus vs. Holland pairing. 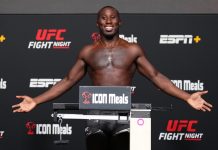 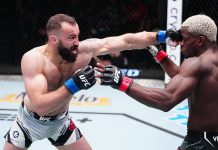