As a kid, Bellator 271’s Steve Mowry was scared of The X-Files, but grown up “Tall Steve” is capable of terrifying opponents in the cage. And it’s a good thing, too, since he fights “The Boogeyman” next.

Believe it or not though, the 6’8″ professional fighter from Sanford MMA was scared of The X-Files as a kid.

Hey, who can blame him. In the 90s and early 00s, the paranormal drama ruled the air waves, and gave viewers around the globe nightmares. Flukeman, anyone? Mowry has revisited the show of late, which he wasn’t allowed to watch as a youngster.

“Whenever I was a kid, I was too scared to watch it. My oldest brother is 10 years older than me. Whenever he watched it, he was allowed to have it on, but if The X-Files came on, we had to leave the living room kind of thing,” Mowry recalled in a recent interview with Cageside Press. “I watched an episode whenever I was in middle school, and I found out why. It was intense.”

Ahead of the Halloween season this year, Mowry revisited the show, just to get in the Halloween spirit. When he’d originally caught bits of the show, of course, he was around 10-12 years old. “Now that I’m older, it is kind of corny. It didn’t age perfectly, but it did age well in terms of storytelling and dynamic, that kind of thing.”

These days, Mowry is the one providing the scares. To opponents, anyway. The 9-0 heavyweight returns to action at Bellator 271, where he’ll take on an experienced veteran in Rakim Cleveland. Aptly named “The Boogeyman” — let’s stay with the spooky theme — Cleveland has more than three times the experience of Mowry, at least in terms of fights.

“He’s very dynamic, very athletic. he’s got powerful strikes,” Mowry observed of his opponent. “He shows the savvy and the experience of somebody that’s been in that many fights. He’s an interesting opponent, but I’m looking forward to exhibiting my superior skill.”

With a record of 22-13-1 (1NC), Cleveland might just be indicative of the type of opponent Mowry gets moving forward. Either more experienced, or perhaps even ranked, given Mowry finds himself in the #7 spot in the weight class.

“I don’t know if there’s a good answer to that,” replied Mowry when asked about that notion. “I’d just say that if they call me with a name and it makes sense, then I’m going to say yes.”

Mowry had expected to face another notable opponent back in August, UFC veteran Marcelo Golm. Unfortunately, he had to pull out of the fight.

“I hurt my foot. I threw a kick in practice and my toe had like snapped in half and fell off to the side,” explained Mowry. “It happened at a very weird time in relation to the fight. It was one of those things where it was far enough out that I wanted to see if it could work, but it was close enough that I knew it was going to be an issue.” The closer to the fight he got, the more Mowry realized it wasn’t going to work. “It was bad. I couldn’t press on my foot for two weeks, I couldn’t wear a shoe. My foot was like a piece of ham. It was bad.”

The Golm fight is one he’d like to get back, however. “Yeah. Definitely.”

Mowry trains with Sandord MMA, born out the ashes of the Blackzillians, a situation that he called “less than ideal.” From there, a core group of fighters and coaches decided to stick it out, under the leadership of Henri Hooft and a handful of other coaches. Of late, the gym has turned into a juggernaut.

“We’re trying to always help each other get better. We’ve had many iterations come and go, but now we finally landed on Sandford MMA.” The work is never done, noted Mowry. “The success we’ve seen is just largely attributed to just a big group of guys that are down to make it work no matter what.”

Throughout the evolution of the gym, Mowry never considered changing camps.

“Nope. I put my feet down here in Florida for the first time actually six years ago, two days before Halloween. Two days before Halloween I put my feet down in Florida and said ‘I’m never leaving until I’m done,'” he recalled. “Don’t get me wrong, it definitely looked touch-and-go sometimes, it looked shady, it looked like things might not work out, it looked like things might be dicey, at any minute something could give, but we’re very blessed to say that we’ve made it this far, and I’m still trudging forward.” 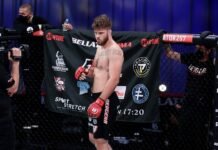