New York, NY — After a decade plus on the regional scene, Chris Curtis finally arrived in the octagon at UFC 268, and made the most of the opportunity.

Curtis (27-8) had volunteered to step up on short notice against Phil Hawes a few weeks ago. While the fight fell through, it was rescheduled for the big card in New York City on Saturday, and Curtis defied the odds, scoring a first round knockout of the surging “Megatron.”

“I wish I had the words. Especially at Madison Square Garden, to get a knockout win in the first round when everyone counted me out,” Curtis exclaimed following the fight. “You guys seen the odds for this? It was pretty bad, right? Like 4-1. I hope I lost all of you money.”

Speaking to media outlets including Cageside Press backstage, “The Action Man” was joking with that comment, but admitted that making his UFC debut after competing so long left a little chip on his shoulder. Luckily, it didn’t overshadow the positives.

“You do have a chip, but my god, what more could I ask for? This is the best that it gets.”

Just being in the UFC, however, is not the end goal for Chris Curtis. “Anyone who says this is the finish line is an idiot. I’ve been working, my goal wasn’t just to get here,” he explained. “You always see people get here, and they lose all their fights, and they have ‘UFC veteran’ next to their name. I hate that sh*t. Like no. You have to earn the title. So my goal is to earn the title, not a world title, but the title of UFC fighter. Not just having a fight.”

Having lived the life of a fighter for a decade, Curtis recognizes that despite his win, “this is just step one.” He could also use a little cash to get to step two. “You guys hear it a lot, but I am hilarious broke right now. And I’ve spent everything I’ve had to pursue this career. I am hilariously poor right now. So to get a knockout at Madison Square Garden, probably the worst card to get a knockout on with freaking Gaethje and Chandler fighting, and Usman, thanks guys, but if Dana White’s so inclined, I could really use 50Gs, please.”

Curtis didn’t get one of the official post-fight bonuses on Saturday night, but in his own post-fight press conference appearance, White suggested that Curtis would get a little extra on his paycheck.

Watch the full UFC 268 post-fight media scrum with Chris Curtis above. More coverage can be found below. 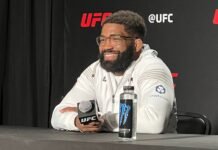