A former Cage Warriors champion, the undefeated Garry had all the tools to be a future Top 10 fighter in the welterweight division and potentially a champion as well. For his debut, he’d take on Contender Series winner Jordan Williams, who was still seeking his first win inside the octagon.

Come the end of the night, Ireland’s Garry had proved that for now at least, the hype was real.

Both fighters took the center of the octagon after a touch of the gloves. Williams threw a low kick to start the fight. A couple of punches from Williams backed Garry up. Williams landed a 1-2 on Garry again that bloodied his nose. Williams backed Garry up and shot for a takedown but ended up clinching with Garry putting him against the fence. Garry and Wiliams switched positions a couple of times on the fence. Just over a minute left, and the fighters went back to the center of the octagon. Williams landed another right hand that snapped Garry’s head back and almost ate a high kick. Williams rushed Garry and ate a counter left hand that put his lights out with less than ten seconds left in the round.

What a comeback for Garry, and what a heartbreaker for Williams, who has lost his last two via stoppage. Following the fight, Garry cited Conor McGregor’s famous “we’re not here to take part, we’re here to take over” quote, and declared the beginning of the Irish Invasion, Part 2. 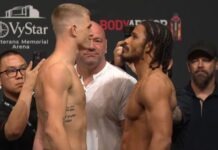 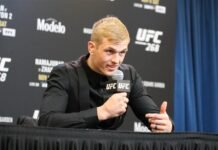 UFC 273: Newlywed Ian Garry Plans to Take Hype and Run With It