Souza had come in heavy, and on short notice, and from the outset, Baghdasaryan (7-1) appeared to have the perfect game plan for him.

Not that the former kickboxer was entirely happy with his win.

“I feel good, but not happy,” he told media outlets including Cageside Press following the fight, inside the historic Madison Square Garden. His main complaint was the lack of a finish. “But it’s okay. Sometimes it’s happening like this too. It’s good.”

Going the distance does have its upside, he later agreed. “It’s experience, and yeah, after every fight, it doesn’t matter how it went. It’s giving you good experience, for sure.”

One standout move from the three-round affair was Baghdasaryan’s low kick. “That low kick’s special for tonight,” he admitted. “I know he’s karate [style], and he’s going to do some movement. It’s going to be hard to catch him, because he knows if he stands with me, it’s not good for him. That’s why I was thinking, just break the leg, slow him down, and continue,” the Armenian fighter stated.

Following the fight, Baghdasaryan also gave his thoughts on calling out opponents — and why he won’t do it.

Shockingly, the featherweight revealed he wasn’t fully aware that his opponent had missed weight until the day of the fight. “I didn’t know,” Baghdasaryan said, noting that Souza had apologized previously. “Today the commission told me. I said ‘it’s okay, I’ll see you in L.A. and then give you that percentage back, or go eat something.'”

Ask if he had indeed returned the fine money from Souza’s weight miss, Baghdasaryan clarified that “I was joking, but I can give him too. It’s nothing.”

Watch the full UFC 268 post-fight press conference with Melsik Baghdasaryan above. More coverage from the event can be found below. 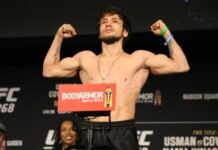 Let’s Try This Again: T.J Laramie vs. Melsik Baghdasaryan Back on for April 16 UFC Event