When you look at the resume of Chris Curtis, it hardly looks like that of someone who is about to debut in the UFC. The thing is littered with wins over high-level opponents. It includes finishes of UFC veterans and a highlight reel KO on the Contender Series. Yet still, the 34-year old has yet to step into the famed octagon.

It’s well-documented by now, that he almost never did. Following his stint on the Contender Series that didn’t result in a contract, he retired for the first of what would be two times. The thought of not making it after all he had been through, was just too much.

“When I first started MMA, my dream – I wanted to be in the UFC. I wanted to succeed in the UFC,” Curtis said. “Getting a highlight reel on Contenders [Series] and not getting signed really hurt. That crushed me.”

In addition to not getting the contract after a solid KO and a storied career, he did so with physical adversity as well. He had entered the fight with a torn groin already and then broke his hand on the very first punch. After doing all of that and still not getting in, he doubted whether he would ever do so.

The first retirement, like so many MMA retirements, was short-lived. His management got word that PFL was interested in him. While the million dollar grand prize was alluring, he was hesitant. The hesitation wasn’t just because he wanted to stay retired, but he was worried about what would happen if he didn’t come out on top.

“Then they convinced me to do PFL and I was kind of hesitant on PFL,” Curtis explained. “I was afraid that if something went sideways, I would never even have the option to sign with the UFC. If this goes sideways, I’m even further from the dream than ever.”

And it did precisely that.

“Lo and behold, shit went sideways,” he said, referring to his four-fight stint in which he only won a single fight. “I succeed big, but I fail big as well.”

Following that debacle, he decided it was time to step away again – maybe for good this time. So he brought the idea up to his son, who had seen his whole career.

“I talked to my son, who was 12 at the time. And I’m like ‘maybe I’ll just move back home and quit fighting’,” he said. “And you have to understand that my son was 3 weeks old when I had my first fight in MMA. So his entire life, all he’s known me as is a fighter. I’ve been fighting full-time since he was a year old.”

While some kids might be excited that their dad wasn’t going to get punched in the face anymore, the younger Curtis didn’t get it. In genuinely confused him.

And after listening to his son and his confusion, Curtis realized something – he had a point.

So rather than stay away again, Curtis got right back at it. He rattled off four wins in six months – including two against UFC veterans. That got him the short notice call to fight Phil Hawes. While there was a slight delay to the fight, Curtis will now finally make his UFC debut. The journey took him a dozen years and nearly three dozen fights. But he’s here – thanks largely to his son.

You can catch Curtis’ debut at UFC 268 as part of the ESPN+ prelims. You can also hear the entire audio of this interview at 34:17. 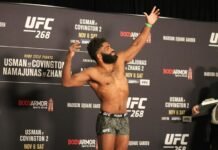 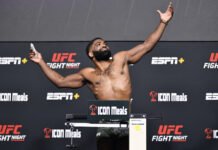