RIZIN Fighting Federation has announced the launch of a new series of events, with the first, RIZIN TRIGGER 1, set for later this month.

The TRIGGER series “will be a platform to provide opportunities to regional fighters, veterans to turn around their careers and also give regional fans the LIVE RIZIN event experience,” promotion CEO Nobuyuki Sakakibara was was cited as saying in a press release Thursday.

One unique twist: the TRIGGER series will, for the first time, see RIZIN athletes compete in a cage.

“There are many fighters who are looking to compete overseas, where the cage is more common. We would like to provide opportunities to RIZIN fighters to be able to compete in both platforms to prepare themselves for higher competition. Our original cage is currently being built and hopefully it’s done on time,” Sakakibara stated.

RIZIN TRIGGER 1 will take place November 28, 2021 in Kobe, Japan at the Kobe Memorial Hall. In addition to MMA, a number of kickboxing fights will also take place. The card as announced on Thursday breaks down as follows: 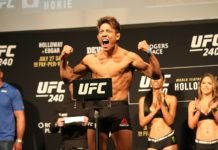