Former PFL Featherweight champion and 24-fight veteran Andre Harrison went without a fight for two years because he was coming off a loss.

“I wish I had a better story, but the fact of the matter is, I just could not find a fight. All of the big promotions wouldn’t sign me because I was coming off a loss.”

That is Harrison (24-2-1), the last man to hold the World Series of Fighting featherweight title before the belt was retired — and the first to hold the PFL version of the title. He is also the man that fought current PFL champion Movlid Khaybulaev to a draw. Harrison has been on the sidelines for two years because he could not find a fight on the regional scene, and a major MMA organization would not sign him because of his last loss.

In the 2019 PFL tournament, he lost to Alex Gilpin in the semifinals via ninja choke in the second round. He hasn’t fought since.

“You know, the loss to Alex Gilpin, I don’t take anything away from that man. Hell of a fight, and he beat me fair a square. But if we fight ten more times, I think I beat him every single time. Of course, that is just my opinion; I could be very wrong. That is the good thing about fighting; we can find out,” Harrison told Cagesidepress in a recent exclusive interview.

All of the major promotions reportedly told him to get one win on the regional scene; however, no one would accept a fight with him. “It was very, very frustrating. I have been training the entire two years, and I feel like I lost two years of my prime on the sidelines,” Harrison said.

“My management and coaches would come to me with a fight, and three weeks later, my opponent would be out of the fight, or I would find out they didn’t sign the contract. I was very hopeful throughout the two years, but nothing came of it.”

He tried to fight for all of the smaller promotions, such as LFA, Titan, CFFC. But, not one of them could find an opponent for him.

Thankfully, Harrison finally got a fight. He returns to action on November 7 at CES 65 against Mauro Chaulet. “The Bull” is not taking this fight for granted.

“Being out so long, you kind of like, learn to appreciate the position that you’re in. I’m not getting any younger, and I have to capitalize on every opportunity given. When that opportunity was taken from me these last two years, it truly hurt. It hurt bad. I was ready and in shape, and there was nothing I could do about it,” Harrison said. “I took fighting for granted all those years because I could fight whenever I wanted to. Living these last two years was painful. Now that I have this opportunity, I’m going to take full advantage of it in every aspect.”

“There isn’t much film on my opponent, to be honest. I know that he is tough, he can strike, and he can wrestle. That’s all I really need to know. He is game, and I know this will be a very exciting fight. I will finish him in the second round. Tune in.”

With the 2021 season of the PFL over, Harrison reflected on his weight class and said two match-ups need to happen at some point.

“The trilogy between myself and Lance Palmer must happen. I beat him for the title in 2017, and he knocked me out of the tournament in 2018. We are 1-1,” Harrison said.

“Movlid [Khaybulaev] is a good guy, man. We have talked off and on since our first fight. After he won this year’s tournament, the morning after, he messaged me and said that it should be him and I fighting, and he hopes I go back to the PFL. He also wished me good luck in my upcoming fight. I think the fans want that fight.”

The rematch between Harrison and Khaybulaev would be amazing, especially with how the first fight went. “It’s funny; the broadcast was saying Movlid has never lost a round. Well, excuse me, but he lost two against me. Just saying.”

You can watch Andre Harrison’s fight against Mauro Chaulet at CES 65 exclusively on UFC Fight Pass this Sunday, November 7. 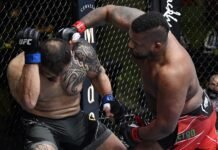