Featherweight Daniel Weichel returns to action at Bellator 270 in a fight that very well could have played out during the promotion’s featherweight grand prix.

Both he and opponent Pedro Carvalho took part in that tournament, with Weichel eliminated in the quarterfinal round on the same card that saw Carvalho fall to Patricio Freire.

Weichel bounced back in his last outing, against Hawaiian Keoni Diggs, earning a split decision to shake off his grand prix loss to Emmanuel Sanchez. “Keoni was a very tough opponent, very strong, physically strong, good jiu-jitsu, good striking. So it was very important for me to win this one, and especially to dominate him,” Weichel said, looking back at the June contest. “That also built more confidence in my striking, and I’m looking forward to implementing more of my wrestling and jiu-jitsu in the next one.”

He’ll be implementing it in hostile territory in Ireland. Carvalho isn’t Irish — rather, he’s Portuguese — but he does train out of SBG Ireland, making him something of an adopted son.

“I’ve been there before, when I fought Brian Moore. I love the Irish fans, they always support their guys and they build an awesome atmosphere,” said Weichel. “But we will also have some fans, some friends and family from Frankfurt, Germany there. So I will take that energy with me into this fight.”

Watch the full Bellator 270 media day appearance from Daniel Weichel above. More coverage of the event can be found below. Bellator 270 takes place Friday, November 5 at the 3Arena in Dublin, Ireland. 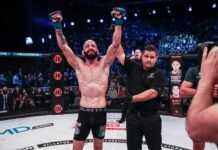