May’s Bellator London card has a couple of significant additions to its lineup.

Bellator officials confirmed Tuesday that Denise Kielholtz vs. Kana Watanabe, and Daniel Weichel vs. Robert Whiteford, had joined the promotion’s return to the British capital.

MMA Fighting was first to report the match-ups.

Kielholtz (6-3), a former Bellator title challenger and Bellator Kickboxing champion known as “Miss Dynamite,” will be fighting for the first time since a failed bid at Juliana Velasquez’s flyweight title. That fight took place at Bellator 262 last July, and saw Kielholtz on the losing end of a split decision.

Watanabe (10-1-1) suffered the first loss of her professional MMA career in her last outing, against Liz Carmouche. Prior to that, the Japanese fighter had won two bouts under the Bellator MMA banner. In those, she got the better of former title challenger Alejandra Lara and Brazilian talent Ilara Joanne.

Daniel Weichel (41-13) will be looking to get back in the win column at Bellator London in May. In 2021, he split a pair of fights, earning a split decision against Keoni Diggs before dropping a unanimous decision against Pedro Carvalho in November. The German featherweight has twice challenged for gold in Bellator’s 145lb division, and won the promotion’s Season 10 featherweight tournament.

Whiteford (16-4, 1NC) returned to action last October after a nearly two-year absence. However, an accidental eye poke by Andrew Fisher left him unable to continue at Bellator 267, resulting in a No Contest. 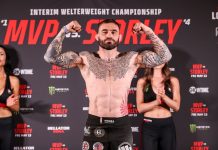