Roman Kopylov had the privilege of welcoming recent Dana White’s Contender Series winner Albert Duraev to the octagon at UFC 267.

Duraev hadn’t lost a fight since 2014, while Kopylov was coming off the first and only loss of his professional career.

Duraev was clearly the more explosive man from the outset, knocking Kopylov off his feet with the first leg kick he landed. His right straight was there for him early, but it wasn’t soon before he began getting wild with hooks, searching for the quickly backtracking Kopylov. To his credit, Kopylov began setting in over the course of the round, as he began finding a home for his jab and inside leg kick, while also avoiding most of Duraev’s bigger strikes.

Kopylov opened up and dropped Duraev badly to start the second round. Duraev recovered quickly and finally level-changed for a takedown but it was stuffed well. Kopylov grabbed the cage to prevent the takedown and was given a stern talking-to by Duraev. Duraev then promptly got a takedown and got to full mount. Duraev briefly contemplated going for an arm-triangle but instead opted to smash Kopylov with elbows from full mount. Duraev continually was throwing massive strikes and eventually attempted a rear-naked choke at the end of the round but ran out of time.

Duraev attempted a takedown to start round three, but the clearly gassed Kopylov was able to stuff it. They separated but once again Duraev wasn’t able to get a takedown and ate a right hand as a result. Kopylov put his hands on his knees looking deadly tired, and then landed a big straight ala Derrick Lewis. Kopylov was able to land some nice strikes over the course of the round and even got a huge takedown to end the round against Duraev. Despite Kopylov doing his best to go for the finish, it wasn’t enough. 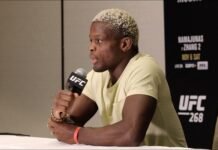