The Ultimate Fighting Championship is back in Abu Dhabi UFC 267, and it’s another big event. Not to mention a free one. The card is headlined by champ Jan Blachowicz and Glover Teixeira for the light heavyweight title. In the co-main event for the interim bantamweight title, it’s Petr Yan and Cory Sandhagen. With a stacked card there are three UFC debuts set to happen. Frenchman Benoit Saint-Denis will make his debut against an established veteran Elizeu Zaleski.

Benoit “God of War” Saint-Denis
Standing at 5’11″
Fighting at 170 lbs (welterweight)
25-years-old
Fighting out of Paris, France
Training out of Woirin Team Elite
A pro record of 8-0, 1 NC
1 KO/TKO, 7 Submissions

How will Saint-Denis fare in the UFC:

Saint-Denis has only been competing in MMA for just nearly four years. His progression has been evident over the last few fights. Beating much better competition lately, he’s deserving of this UFC opportunity.

Saint-Denis has bright spots as a striker but is a far more comfortable grappler. He does throw a nasty left kick to the body. He swings looping punches that are too wide and he overreaches. Not the cleanest striker at all but will throw combinations, attack the body, and throws with some power.

The Frenchman is a black belt in judo but at least in MMA, his wrestling is moderate. It’s good enough, especially for his experience. He’s either going to struggle more as he fights tougher competition or it’s going to increase along the way. Time will tell.

Saint-Denis usually doesn’t set up his takedowns. Instead he presses guys against the cage and drops to the legs. Saint-Denis is usually back and forth on the mat with his foes trading top position. He does have seven submission wins from a rear-naked choke to an armbar to a guillotine to a kneebar to an arm-triangle. From on top or bottom, he is a treat to catch a limb. I don’t like how he can work into a dominant position and easily lose it and find himself on his back. He’s done fine off his back, but losing a dominant position is still never good.

Saint-Denis at only 25-years-old appears to have a bright future. I see him as UFC level but overall his striking defense is a concern. I think his wrestling is a work in progress and it can hang with a lot of fighters in the UFC. His grappling is by far his best weapon and I see him submitting guys but also losing off his back. Being so loose in the position I’m not confident he can out-grapple the better competition. I do like this signing and think Saint-Denis has a bright future.

How he matches up with Zaleski:

Kind of a strange pairing having Saint-Denis debut against a veteran like Zaleski. It’s not even on short notice so it’s a puzzling fight to have Saint-Denis take. Saint-Denis’ path to victory is to take Zaleski down and submit him. Zaleski has only been submitted twice and the last time was in 2013. Zaleski only really struggled with takedown defense against Nicolas Dalby, Omari Akhmedov, and Keita Nakamura. All three are better wrestlers than Sanit-Denis and that was Zaleski’s first three UFC fights. On the feet, Zaleski has a significant advantage. This is just a good match-up for Zaleski. 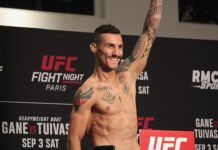 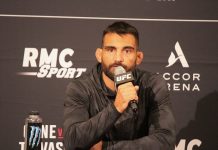