The octagon is back in Abu Dhabi for UFC 267, a rare free major event from the promotion. The event is headlined by a light heavyweight title fight between champ Jan Blachowicz and Glover Teixeira. An interim bantamweight title is up for grabs in the co-main, featuring Petr Yan and Cory Sandhagen. Three UFC debuts set to happen on Saturday as well. In one, Brazil’s Allan Nascimento will take on Russia’s Tagir Ulanbekov.

How will Nascimento fare in the UFC:

Nascimento is super fun fighter. I don’t see him as a top fighter in the flyweight division but he isn’t someone that’s ever going to be run over. Nascimento is a submission guy hence as to why he has thirteen submission wins. He’s still a dangerous guy on the feet though. Willing to stand and trade with anyone the long Nascimento is quite diverse in his approach. He’s going to throw a lot of head kicks and just kicks in general, especially at his preferred range. A lot of teep kicks up the middle will be thrown from the Brazilian. To close the distance from time to time you will see a flying knee. His hands are good but tend to overreach leaving himself out there.

Nascimento’s submission base is his focal point. He’s won with six different submissions and the majority of subs have been off his back. That’s a good thing considering his takedown defense isn’t too good. He’s pretty comfortable off his back with fluid hips and long legs being able to attack from all angles. He’s not the guy you want on top as it’s a matter of time before he moves into a dominant position and secures a submission. What’s going to hold him back is that his wrestling isn’t up to par with his jiu-jitsu. As good as he is off his back he’s not going to have too much success against better talent.

Nascimento is a scrapper on the feet but is just too hittable. I really do like the signing as I think he’s UFC level in a lot of ways. I just don’t think he’s ever likely to be ranked.

How he matches up with Ulanbekov:

Ulanbekov is someone Nascimento can have some success against on the feet. Ulanbekov is low output mainly being a counter-striker. Nascimento can slightly let loose and let Ulanbekov have it right away. It’s going to be a matter of time before Ulanbekov takes the fight down. When he does I don’t expect him to be subbed while on top. Ulanbekov is strong on top riding out positions making very few mistakes. This could be a slower-moving fight but a fight I see Ulanbekov winning comfortably. 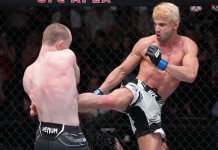