Caio Borralho fought just three weeks ago on Week 5 of DWCS. One of the first things that fans can notice about Caio is that he has a very wide, bouncy karate stance and he keeps his hands low.

Borralho was able to show off his quickness and great footwork during the first round. Even in the small UFC Apex octagon, Borralho was able to evade most of his opponent’s attacks and pressure with movement. Borralho’s shot selection was great with lots of dynamic strikes coming from every angle.

Borralho even showed off a very slick takedown at the beginning of the second round. Caio also showed a lot of power and technical expertise against the cage in the clinch and has some nice trips and Judo tosses in his arsenal. Towards the end of the round you could definitely see that Borralho was slowing down and his opponent was speeding up.

In the third round, the fatigue in Borralho was even more evident. Aaron Jeffery came out and pushed the Brazillian to the fence immediately. Borralho was again able to get his opponent to the ground but, just like in the second round, it did not last long. Jeffery pushed the pace really hard in the last round, and was the aggressor for the entire fight, always moving forward.

Borralho has a lot of things going for him. An exciting style, fast hands and a good eye for the straight knee up the middle. Caio didn’t get the contract thanks to him gassing at the end of the second round and ‘playing it safe’ in the third.

For Caio Borralho’s first Contender Series opponent he took on the then 9-3 Aaron Jeffery. Aaron is undoubtedly the most challenging/experienced opponent that Caio has faced thus far in his pro career.

Jeffery has only lost to undefeated UFC fighter Sean Brady (14-0), back in 2015, and fellow UFC fighter Brendan Allen (17-4) in 2019. Allen was the first and only fighter to finish Jeffery with his first round rear naked choke finish over him, which also happened to be on the Contender Series. Both of these fighters are hot prospects in the UFC right now.

Jeffery is definitely a quality opponent as the combined record of all the fighters that he has faced is  67-34.

Aaron is also very dangerous and has finished 7 of his 10 pro wins by KO/TKO. And Jeffery had won the Cage Fury FC middleweight championship earlier this year. Definitely a good win for Borralho.

Caio essentially had no road back to the Contender Series as he did not have to fight again to come back. A few days after competing it was announced that Caio would be returning for another fight on DWCS just three weeks later.

Caio Borralho (9-1) didn’t earn a #UFC deal on Dana White’s Contender Series this past Tuesday, but will get a second shot. He’ll fight again on the show Oct. 18. Opponent TBA. pic.twitter.com/jSHBgB4flk

For this fight, Borralho will be making his professional MMA debut at the 205lb weight class. Caio has fought predominantly in the middleweight division but has also fought at as low as 170lbs earlier in his career.

For Caio Borralho’s second appearance on DWCS, he will be facing Jesse Murray.  Jesse, unlike Borralho, has had the majority of his fights (7 out of 11) in the light heavyweight division.

Murray has not faced strong competition thus far in his professional career with the combined record of his previous opponents (at the time he fought them) being 69-70. Murray is a two time King of the Cage light heavyweight title winner but most of his fights before 2017 were against fighters that now have lopsided losing records.

Heading into the fight Borralho is justifiably the favorite but in order to get a contract it will be important for him to really push the pace and look for a finish. But at the same time be careful and be sure not to gas out and make sure he has a memorable performance. Look for Caio to dazzle with his fast hands and nice combinations early, especially if his opponent is coming forward non stop. 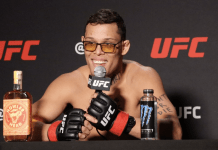 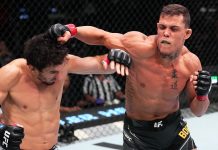