Phoenix, AZ — Former Bellator MMA and RIZIN bantamweight champion Kyoji Horiguchi will fight in North America prior to the end of the year.

During a media scrum following Thursday’s Bellator 268 weigh-ins, Bellator President Scott Coker revealed that they have some exciting plans for the Japanese fighter.

Asked if the fight would be against current bantamweight champ Sergio Pettis, Coker neither confirmed nor denied the match-up.

Horiguchi (29-3) won both the RIZIN Fighting Federation and Bellator belts between 2018 and 2019, but had to vacate both after suffering an ACL injury. The former UFC contender returned to action in December 2020, defeating Kai Asakura in a rematch of a non-title bout that had seen Asakura score a shocking upset KO.

Horiguchi won the rematch via TKO in the opening round. He has not fought since.

Watch the full Bellator 268 media scrum with Scott Coker above. More coverage from Saturday’s event in Phoenix, AZ can be found below! 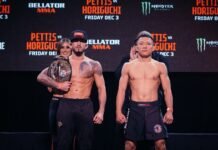 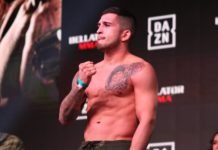 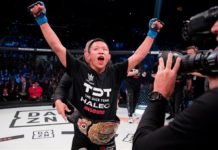