RIZIN 30 saw the quarterfinal round of the promotion’s Bantamweight Grand Prix continue — with a number of notable names moving on in the tournament.

Taking place Sunday in the promotion’s home base, the Saitama Super Arena in Saitama, Japan, former champ Kai Asakura was one of the fighters moving forward to the semifinal round. That came with a unanimous decision win against Alan Yamaniha. Former UFC fighter Naoki Inoue also advanced, picking up his own decision victory against Yuto Hokamura.

RIZIN 30 also boasted an appearance from super atomweight champ Ayaka Hamasaki, in a non-title bout. She picked up a decision victory over veteran Emi Fujino.

In a first for RIZIN, a women’s kickboxing match opened the card, which saw Panchan Rina defeat Momoka Mandokoro.

Full results from Sunday’s card can be found below! 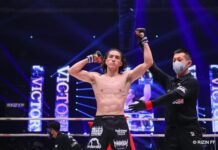