Dana White’s Contender Series (DWCS) returns Tuesday, and Chris Duncan might just be the story of the week.

Duncan, a.k.a. “The Problem,” was supposed to compete on Week 5 of the Contender Series this year. But opponent Manuel Gaxhja first missed weight, then pulled out entirely after falling ill due to a botched weight cut. That left Duncan with a problem of his own: he’d made weight and was ready to fight, but had no dance partner.

Luckily, Dana White and co. were able to book the lightweight into a match-up with Slava Borshchev just two weeks later. Meaning Duncan gets his shot tomorrow night.

For more on that match-up and the rest of DWCS 2021 Week 7, which includes familiar names like Lorenzo Hood and Mitch Raposo, read on!

A battle between two talented guys early in their careers.  MMA Lab vs. Roufusport in this one. The footage was limited with both fighters but more so with Cortez. From what I’ve seen from Cortez he’s a serious striker. Hes also the older brother of UFC fighter Tracy Cortez so fighting is in the blood.

Rodriguez is an accomplished high school wrestler that has adapted to a well-rounded fighter. If Rodriguez fights as he did in his last fight he’s going to be a handful in this one. Right now there are too many uncertainties with Cortez. Not enough footage on him. A bet I’d recommend is Rodriguez by decision. 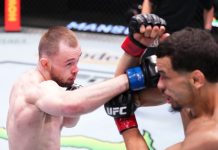