Mackenzie Dern looks to continue her impressive rise through the strawweight division in the main event of UFC Vegas 39 against Marina Rodriguez and Cageside Press has its picks set.

The main event of UFC Vegas 39 features jiu-jitsu phenom Mackenzie Dern taking on the always challenging Marina Rodriguez. Since her first loss as a professional against Amanda Ribas in 2019, Dern has rattled off four consecutive wins with three submissions, including Nina Nunes in her last fight. After a 2-1-2 start to her UFC career, Rodriguez burst onto the radar of the strawweight division with a TKO victory over Amanda Ribas. She successfully followed that up with a win over Michelle Waterson. Dern was unanimously picked.

The co-main event pits Randy Brown against Jared Gooden. Brown has put together a solid career since being picked by Dana White on Lookin’ for a Fight, owning a 7-4 record in the Octagon. Recently, he’s won three of his last four fights by stoppage and only came up short against top contender Vicente Luque. After 21 fights on the regional scene, Gooden joined the UFC last year and took losses against tough opponents Alan Jouban and Abubakar Nurmagomedov. He only needed 68 seconds to win by KO in his last fight, however. Brown was unanimously picked.

Flyweights Sabina Mazo and Mariya Agapova look to bounce back from losses in their last bouts. For Mazo, a loss to veteran Alexis Davis snapped a three-fight win streak. For Agapova, it was a loss to Shana Dobson that stopped a three-fight run. All but two writers picked Mazo. 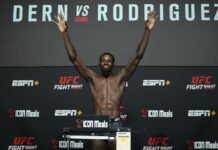