Ahead of UFC 266, it was hard not to look at the Las Vegas Pay-Per-View’s co-main event as anything but a lopsided match-up.

Yes, Lauren Murphy deserved to be there, having won five straight fights. Certainly more so than any of the remaining bodies in the flyweight division. But champion Valentina Shevchenko was just next-level, rarely looking mortal in her previous five title defenses.

Then again, once upon a time, Matt Serra beat Georges St-Pierre. In MMA, as cliche as it is, anything can happen.

Still, things went according to plan for the champ early on at UFC 266. In the opening minute, she’d landed a left hand and a body kick. Lauren Murphy seemed at a crossroads when it came to finding her range; getting in close and staying on the outside both played to Shevchenko’s advantages. Shevchenko found success with combos, darting forward, firing a low kick, then letting her hands go. “Bullet” would out-strike the challenger throughout the opening frame, then land a takedown at the end of the round for emphasis.

In the second, Murphy had some success driving the champ up against the fence, working for a takedown. If nothing else, she gained a bit of control time. What she did not gain was the takedown, with Shevchenko pulling free. And once again in the second, aside from dominating on the feet, Shevchenko also imposed her will on the ground when they did go to the mat.

Round three found Lauren Murphy continuing to struggle at solving the riddle of Valentina Shevchenko. She couldn’t. Round four was more of the same, with a slip as Murphy stepped on the champ’s foot drawing a cheer, but not amounting to anything. Shevchenko’s game was just too tight, and Murphy couldn’t seem to find the chink in her armor. Murphy found herself putting the brakes on her own attacks, a result of the champ’s well-timed counters.

Then, with two minutes left in the fourth, one fighter did find her opening: Valentina Shevchenko. The champ caught Murphy with a right hand, then fired a head kick that landed. As Murphy was reeling, Shevchenko swarmed. Murphy ate a number of unanswered strikes, but the champ followed her to the ground rather than keep the fight standing. That bought Murphy some time, but it didn’t save her. Schevchenko began dropping elbows and punches until the ref waved it off.

👊 @BulletValentina letting it fly in the fourth round

The victory marks Shevchenko’s sixth title defense, tying Ronda Rousey, though if you include her Strikeforce run, “Rowdy” actually had seven (her Strikeforce title was upgraded to the UFC women’s bantamweight title when she joined the promotion). Amanda Nunes has five defenses of her bantamweight title, and two more of her featherweight belt, giving her the overall lead, just not in any one division.

Regardless, Shevchenko made history Saturday at UFC 266, and she hasn’t shown any sign of slowing down. No one in the division has found the answer to her dominance to date. 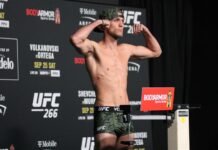