Alexander Volkanovski and Brian Ortega had both been living under the shadow of Max Holloway prior to Saturday night.

For Ortega, he’d fallen to Holloway in his first shot at gold in the UFC. Volkanovski’s situation was a little more complicated; he beat “Blessed” to win the promotion’s featherweight championship, and wound up winning a split decision in the immediate rematch. But thanks to the scoring controversy that ensued, with many seeing Holloway as the real winner, the Australian had yet to really forge his own identity as champion.

UFC 266 was a chance to change all that. At least for the winner.

A tense feeling out process opened up Saturday’s main event. Low kicks, feints, the odd exchange. Ortega found himself with his back to the cage, and ate a jab when he tried to get off it. Both men, in fact, had their jab going early. As the round progressed, both men had their moments, but in the final minute, Ortega clipped the champ, causing him to stumble. He’d later catch a kick and land other punch up top just prior to the buzzer.

Round two saw Ortega firing a combination, countering Volkanovski early. As much as the champ’s reach disadvantage hadn’t been an issue in prior fights, Ortega seemed to be making the most of it. Both men showed fast hands throughout, but by the end of the round, Volkanovski had been bloodied, possibly a ruptured cauliflower ear. Still, he was throwing the more powerful shots in a fight that was otherwise pretty close, and likely had a slight edge.

A number of leg kicks opened the third round for Volkanovski. Several went unanswered, and Ortega desperately tried to grab at one, missing badly. The champ then fired a right hand that missed, but that led to an accidental head clash. That seemed to stun Ortega, leaving him with a bloody nose. Ortega turned up the heat, ripping the body and firing upstairs as well. The first half of the third round was the roughest stretch of the fight for Ortega to that point, even if it was in part due to the accidental head butt. But at the two minute mark, Ortega caught the champ and jumped into a guillotine. It was tight, but Volkanovski survived; Ortega then switched to a d’arce, but the champ survived that as well.

Following two failed submission attempts, Volkanovski got on top and looked to do damage, but Brian Ortega had more in him. He threw up a triangle, again having it in tight, but Volkanovski broke free and began landing serious ground n’ pound. Ref Herb Dean took a good look, but Ortega was saved by the bell.

Ortega passed a vision test between rounds, giving him a few extra seconds to catch his breath. He still had to deal with a highly motivated Alexander Volkanovski, who knew how close he he had come both to finishing, and being finished. Early in the fourth, Ortega went for another guillotine, but Volkanovski survived, rolled out, and got on top in half guard. He dropped more ground n’ pound, while Ortega tried in vain to find an arm-bar or triangle. Instead, he ate more punches, getting downright beat up on his back.

HEAVY shots from the champ 👊😳

A game Ortega went after it in round five. The only problem, Volkanovski was right there with him. He might have slowed a step, but the champion still still stood his ground. Ortega chased the finish in the dying seconds, and even caught Volkanovski, rocking him — but it wasn’t enough. Alexander Volkanovski survived multiple submission attempts, put a beating on Ortega, and came away with the win.

Islam Makhachev vs. Alexander Volkanovski Official for UFC 284 in Perth 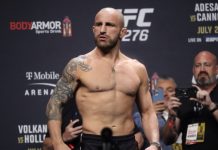