After picking 15 wins as an amateur, Dumas (3-0) turned pro last September. He picked up his third professional win at AKA 17, where he knocked out Lance Thompson in the second round. The 26-year old fighter already has another fight booked at AKA 18 against Mario Mancillas.

Dumas already has a goal in mind. He wants to get on Dana White’s Contender Series by next year. If he keeps fighting regularly and knocking his opponents out, he might just find himself competing for a contract, especially because he has a personality that MMA fans can get behind.

He also has a backstory of how he got into MMA that fans can appreciate. Backyard fighting.

“I started doing backyard fighting when I was on work release because I was just running around doing what I wanted to do, smoking drinking,” Dumas told Cageside Press. He and his friends wanted to start Put the guns down, Put the gloves up, a type of backyard league, but then realized everyone was doing that in different states. “So we decided to make this janky promotion. We were going to be in the backyard with the gloves on, in the dirt.”

When Dumas and his friends started this backyard fighting promotion, he weighed 250 lbs, and slowly but surely, he dropped the weight. For context, he fights at middleweight now,

“I supported it, was like this is fun because I like to go to different people’s hoods, different places. So we were fighting behind churches, Fast Eddies, McDonald’s; the police were looking at us and just said to keep doing it,” Dumas said. “I took my first loss in the janky promotion, so I decided to go to a boxing gym, you know, just to get some work in.

Dumas is fighting for AKA at the moment and hopes to fight for the middleweight title soon and then get noticed by the UFC, which is possible because AKA is streamed exclusively on UFC Fight Pass.

Check out the rest of our interview with SD Dumas above 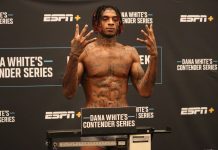