Las Vegas, NV — AJ Dobson picked up the lone finish on the latest instalment of Dana White’s Contender Series — and not surprisingly took home a UFC contract on Tuesday night.

The middleweight, who has trained under the likes of Mark Coleman and Matt Brown, submitted Hashem Arkhagha in the opening round of their fight, which topped the Season 5 Week 4 card at the UFC Apex.

Dobson was highly motivated to get the stoppage. “I saw there were no finishes, and I know the Contender Series, Dana was saying he wants you to be exciting,” he told media outlets including Cageside Press following the fight. “Michael Bisping said ‘you’ve got to go video game style’ and try to go for the win. So I wanted to really throw caution to the wind and give an exciting fight.”

“Next fight I’ll be a little bit more technical, but I wanted to kind of just blow it out, this first one.”

Dobson had no illusions about the durability of opponent Hashem Arkhagha. “I knew he was really tough. I saw in one of his fights, he took two head kicks to the face and ended up winning that fight. So I knew he was going to be a little bit Undertaker style, he was going to get up, but I knew I had a lot more for him.”

Now that he has a UFC deal, Dobson says he’s open to whatever the promotion wants. But, if it were up to him, “it would be amazing if I could get on the card of my mentor, Matt Brown. That’d be a full circle dream come true, it would be unbelievable.” In terms of an opponent, recent TUF 29 winner Bryan Battle is on the list. “I definitely want to fight Bryan Battle. I was actually supposed to be on The Ultimate Fighter, I had the opportunity to be on The Ultimate Fighter, then I got the opportunity to be on the first week of the Contender Series, then they pushed it back to this week.”

“If I was on The Ultimate Fighter, there would have been a different champion,” Dobson continued. “And, we both fought for a similar promotion, B2, and they got me ranked higher than him. So Bryan Battle would be a great fight.”

As for having Mark Coleman as a mentor, Dobson said that “he’s the best motivator. He’s always in the gym, he’s always giving me tidbits and advice. Between him and Matt Brown, I don’t see anywhere I could lose.”

Watch the full Dana White’s Contender Series Season 5, Week 4 post-fight press scrum with AJ Dobson above. More coverage from the event can be found below. 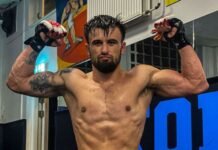 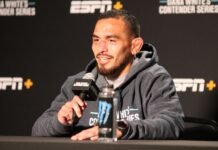