30-26 across the board. That’s the result of Saul Rogers’ effort against Georgi Karakhanyan at Bellator 266.

It was, without question, a dominant win against a fighter who has competed against a who’s who of Bellator’s featherweight and lightweight divisions.

Britain’s Rogers (15-4) moved up to 155lbs for the fight, and it’s a different experience for him. “I’ve had loads of energy, I’ve enjoyed fight week, I enjoyed the fight. Literally, this is the first time I’ve enjoyed the whole process, and I think that’s due to kind of fighting heavier,” he told media outlets including Cageside Press in his post-fight press conference appearance.

Rogers believes he actually did himself a disservice cutting to 145lbs, thinking he was the biggest guy. In fact, he noticed he still held a size difference against Karakhanyan on Saturday. “Now that I’m at 155, I feel like I’m bigger than most, and stronger than most, and faster than most. I’m going to be dominant in this division.”

Next up, Rogers is looking for a very quick turnaround. “I think there’s been a pullout on the Bellator London card in two weeks. I’m going to speak to my management as soon as I’m done here and see if that’s a possibility.” Now that he’s not longer killing himself to make 145lbs, Rogers plans to stay as active as he can be. “At 155, I feel like I can go home, see the kids, see my girl for a little bit, [and then] back at it. Like I said I want to get on that Bellator London. If not, I want to get on the Dublin card before the end of the year. But no doubt in my mind, I want another win before the end of 2021.”

What the full Bellator 266 post-fight press conference with Saul Rogers above. More post-fight coverage can be found below! 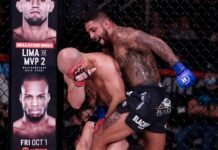 Bellator 287: Saul Rogers Feels He Can Dominate at Lightweight