UFC Vegas 37 is a sprawling card that’s headlined by Anthony Smith and Ryan Spann at light heavyweight. At lightweight, Zhu Rong and Dakota Bush were aiming to get their first win but Bush tested positive for COVID-19. The UFC reached out to regional veteran Brandon Jenkins to take this fight on short notice.

Brandon “The Human Highlight Reel” Jenkins
Standing at 6’0″
Fighting at 155 lbs (welterweight)
29-years-old
Fighting out of Las Vegas, Nevada, US
Training out of Syndicate MMA
A pro record of 15-7
10 KO/TKOs, 3 Submissions

How will Jenkins fare in the UFC:

Jenkins is a fun regional guy but so far that’s been about it. He already has seven losses and although the majority are to decent fighters, he wins have come over mainly lower-level guys. He did score a highlight-reel flying knee knockout in his last fight against former UFC fighter Jacob Kilburn, under the PFL banner. That alone earned this opportunity in the UFC.

Jenkins is a guy that gets hit to give some hits. He’s not really technical nor does he throw a ton of volume. What he does well is break opponents down with leg kicks, and create set-ups for bigger strikes. That includes spinning elbows/back fists and flying knees. Jenkins stands tall and his chin all too often is straight up. I don’t like how easy he is to hit. Jenkins is probably at best in the clinch using knees. He overreaches way too much and his head sits on the centerline. Knocking guys out with elbows and knees is impressive but power in the hands/kicks is what matters. He has the capability to knock guys out with that flashy technique but against better competition that’s less likely to happen. Jenkins has good hands but they’re not good enough. He’s too slow and he has trouble putting it together.

How he matches up with Rong:

Rong is well-rounded, capable of finishing the fight where ever it goes. He fights long throwing a lot of kicks from the outside to maintain his range. He’s good at throwing his kicks up the middle, and really good at attacking the legs. A striking match between the two could be very interesting.

Although he’s a talented guy on the feet, Rong has solid wrestling capability as well. He’s not a great wrestler but he has it in his back pocket. His ground and pound, another talent he brings to the table, is outstanding. If he decides to use wrestling I think that’s his best path to victory. Rong will at times plant his feet and throw in the pocket. His head becomes stationary and it’s caused him to get hit too much. That’s where Jenkins could capitalize, but Rong has shown a strong chin. It’s probably closer than the odds suggest but I think Rong is more well-rounded and has more ways to win. 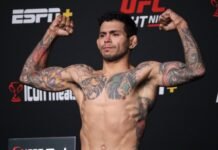 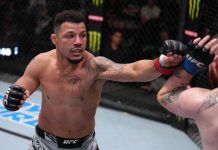