Arman Tsarukyan continued his climb up the lightweight ladder at UFC Vegas 37, smashing Christos Giagos in the first round.

The Fight Night event, which saw the octagon back in Las Vegas once again, found Tsarukyan on a three-fight run that had him blast into the top-15 rankings at 155, with his sole loss to fellow ranked fighter Islam Makhachev in his UFC debut. Greek-American Giagos had won two straight and was coming off a Performance of the Night-winning performance that saw him submit Sean Soriano.

Shockingly, Tsarukyan ended up on the wrong side of the first scramble of the night. Having his first takedown reversed, and Giagos ending up on top, Tsarukyan scrambled back to his feet soon thereafter. Giagos then went for a kick to the body, and Tsarukyan landed a massive check left hook that dropped Giagos badly. Tsarukyan jumped on top with some ground and pound and that was it! A big first-round finish by Arman Tsarukyan.

The knock-on Arman Tsarukyan heading in was that despite the clear talent and physical ability, he never seemed to get the big finish. However that all changed at UFC Vegas 37, he was one of the biggest favorites on the card and he looked it as he smashed Christos Giagos inside of the first round.

Following the fight, Tsarukyan called out fellow ranked lightweight Dan Hooker, which is a fight that he has wanted for a while. Hooker is currently scheduled to fight next week at UFC 266 against Nasrat Haqparast.

Offical Result: Arman Tsarukyan def. Christos Giagos via TKO, 2:09 of Round One. 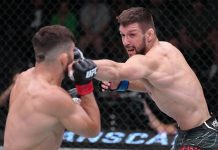