A handful of events have some bright MMA prospects this week; CFFC is already in the books, but Bellator, Titan FC, and RIZIN are yet to come. Here’s the latest Weekly MMA Prospect Report.

Originally from Bishkek, Kyrgyzstan Kamchybekov has been living in Philadelphia, Pennsylvania. His only loss is to current UFC fighter Matt Semelsberger; that went to a split decision. Kamchybekov is well-rounded and has the ability to be fighting for a big promotion at this time. On the feet, he fights very patiently picking his shots. He throws a lot of kicks from the outside and isn’t stingy as he goes to the legs, body, and head. Kamchybekov throws some nice straight punches and his immense power in his hands. Kamchybekov does a solid job punching his way into takedowns. He’s a capable grappler despite having the knockout finishes. It looks like he has a lot to use so watch out for this guy. Kamchybekov defends his CFFC title against Blake Smith (5-2).

Check out the CFFC 100 results here.

Edwards is one of the hottest prospects today coming out of Jackson-Wink MMA and is a sparring partner of former UFC light heavyweight champion Jon Jones. A young kid but he has the attributes to go really far in this sport. Edwards has some sick thai clinch work with nice knees and elbows. He lands often stepping in with strikes and finishes in the clinch with excellent work. Also mixing in a few takedowns while showing solid cardio. He’s also already gone three rounds twice and looked really good. He fights Ben Parrish (4-1).

After going 6-0 as an amateur Neal is currently 6-0 as a pro. Neal is a wrestler first. If he doesn’t finish the fight early he can dominate the fight with relentless takedowns. Once he gets his hands clasped he will dump you on your back in a big way. Neal stays busy with ground and pound and can throw at the same pace and pick it up later in the later rounds even. He fights Alex Polizzi (8-1).

Polizzi has the recipe to be a big prospect in the 205lb weight class. His only loss is to the surging Julius Anglickas. Polizzi was a D1 wrestler at Northwestern University from 2010-2015 and was a state champion. Polizzi needs work on his stand-up but his wrestling and athleticism will take him far. His ground and pound have been his best weapon to date. He fights Grant Neal (6-0).

Kuse is a young fighter with a lot of promise. On the feet, Kuse fights at distance with kicks and long punches. He’s just as good as a wrestler as he is a striker. Kuse has been dominant on top position and is smooth in transitions. His ground and pound is arguably his best weapon. He’s well-rounded but needs a step up in competition. Kuse fights Rob Fuller (1-12).

Takeda has one sole loss to former UFC fighter Damien Brown. Since then he’s got back on the board with four wins. Takeda is the former DEEP Impact lightweight champion with two title defenses. He’s well-rounded with submission wins and TKO wins, although he has gone the distance six times. On the feet, Takeda has an excellent jab and fights behind it very well. He doesn’t have the power, but it’s the accumulation of strikes he lands that is fantastic. He’s just so technical on the feet and is also a good wrestler/grappler and can do it the whole distance of the fight. He fights Yusuke Yachi (22-11). 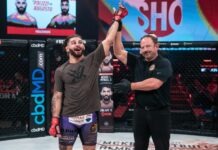