A pair of welterweight knockout artists will collide at an October UFC event.

Randy Brown announced on his Twitch channel that he will be fighting Jared Gooden on October 9 at UFC Fight Night: Dern vs. Rodriguez. Gooden would confirm the booking on social media as well.

Fighting for his job, Gooden (18-6) picked up his first W inside the octagon in July by knocking out Niklas Stolze in a little over a minute. “Nitetrain” was defeated by Abubakar Nurmagomedov and Alan Jouban prior to that victory.

No location, venue, or broadcast plan has been announced for the October 9 event, but UFC President Dana White said that all Fight Nights will be staying at the UFC Apex in Las Vegas, NV. 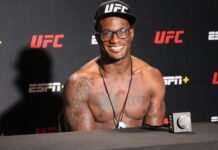 UFC Vegas 33: Jared Gooden Says He Had “No Game Plan,” Wants To Fight Every 90 Days