Andre Petroski had a gritty performance in his promotional debut at UFC Vegas 35, notching a third-round stoppage against Michael Gillmore.

UFC Vegas 35 marked a chance at redemption for Andre Petroski and Michael Gillmore.

The middleweight duo had come up short on The Ultimate Fighter 29. Saturday’s Fight Night card, however, served as the finale of the latest season of the reality fighting show. Outside of the bantamweight and middleweight finals, Petroski and Gillmore were the only TUF alums on the card, allowing them a shot at bigger things down the line with the right performance.

Petroski wasted no time, charging across the Octagon to start the contest. It was Gillmore, however, who landed the first significant strike with a right hand. Petroski then rocked Gillmore with an overhand right into a slam takedown right into side control. Petroski was in full control, nearly taking the back of Gillmore while landing big ground-and-pound. Right as Gillmore was trying to stand up, Petroski lifted him up and slammed him down, taking his back. Petroski had the arm across the chin and was cranking away, but couldn’t get the tap. He ended the first round on Gillmore’s back.

💥@PetroskiAndre lands a heavy right and takes it to the ground

Both fighters were throwing heavy hooks to start the second round, but it was Gillmore who landed the best one. Petroski answered with a head kick and the fight became a tough guy competition. Both men were throwing one hook at full blast at a time until Petroski shot for a takedown that failed. Another takedown attempt came up short for Petroski, who was swept off his feet by a leg kick. Petroski popped back up and the leg kicks were adding up from Gillmore. A big left hand landed for Petroski, who was caught by a right hand when charging in afterwards. Petroski landed another left and a takedown, taking the back of Gillmore before the end of the round and landing several punches.

Petroski charged out and dumped Gillmore onto the canvas with a double-leg takedown right away, transitioning into mount. He pinned one arm down while in mount and fought off a reversal attempt. Petroski stayed in mount, giftwrapped Gillmore’s left arm and pounded away with heavy elbows until the referee stopped the fight.

Andre Petroski def. Michael Gillmore by TKO (Elbows) in Round 3 (3:12) 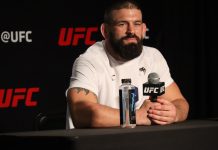 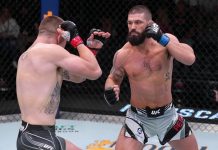 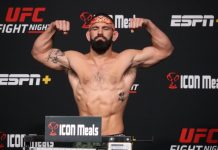