Women’s flyweight Casey O’Neill will make her third appearance under the UFC banner this October, in a fight that could give her a big boost towards title contention.

MMA DNA was first to report the news that O’Neill will take on Antonina Shevchenko on October 2 at UFC Fight Night: Santos vs. Walker. A source close to the situation confirmed the booking to Cageside Press late Thursday.

Shevchenko (9-3) will be looking to get back into the win column in the bout. In her most recent outing, she was submitted by Andrea Lee at UFC 262. Before that, she completely dominated Ariane Lipski and eventually finished her via TKO.

O’Neill (7-0) burst onto the UFC scene this year and has been perfect thus far, finishing both of her opponents. In her UFC debut, “King” finished Shana Dobson via TKO. In her most recent outing, she submitted Lara Procópio at UFC Fight Night: Korean Zombie vs. Ige. Two fights into the UFC, and O’Neill is in the top 15 flyweight rankings.

Now, she’s fighting champion Valentina Shevchenko’s sister, and a win could put her just a couple of fights away from much bigger things.

No location, venue, or broadcast plan has been announced for the October 2 event, but promotion President Dana White said that all Fight Nights will be staying at the UFC Apex in Las Vegas, NV. The October 2 show is expected to be headlined by Johnny Walker and Thiago Santos. 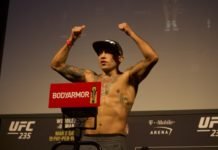