One of two newcomers on the UFC Vegas 34 card (along with Josiane Nunes), Saidyokub Kakhramonov was stepping in on short notice against the dangerous Trevin Jones.

To date, Jones’ wins in the UFC (never mind that no contest for a marijuana suspension that would no longer be an issue today) had been the come-from-behind variety. Meaning Kakhramonov was not going to be able to step off the gas for long in this one.

Both fighters tied up quickly and Kakhramonov hit a beautiful outside trip. Jones got back to his feet but Kakhramonov pulled guard for a guillotine. It was tight but Jones somehow escaped and got back up. They jockeyed for position in the clinch for a pretty good while. After a frantic start from Kakhramonov, he ended the round with his back against the cage.

How'd he get out of that one?! 😳 @SaidYokubMMA bringing the pressure early at #UFCVegas34. pic.twitter.com/CvV3CTKCdD

Finally separating to start round two it didn’t take Jones long to catch a leg and press Kakhramonov against the cage again. Kakhramonov was able to escape and landed a crisp combination landing clean before Jones tied back up. Kakhramonov broke away and went off with output trying to finish Jones. Jones was tired and grasping for air, while Kakhramonov was letting loose wildly— and soon Jones was curling up. Jones regained his bearings and was able to take Kakhramonov down and ended the round in mount.

In round three, Kakhramonov was still fresh with more pep in his step and still throwing heavy. He did land a few good body kicks but Jones closed the distance pressing him against the cage. Jones was mainly just holding on to Kakhramonov and Kakhramonov can’t turn the corner to escape. After a brief separation, and Jones shot in on the leg. Jones left his neck exposed and Kakhramonov locked in a guillotine. With under a minute left the squeeze was too much and Jones went out cold!

Heading into the bantamweight fight, Kakhramonov missed weight, though given how short the notice was, it shouldn’t hurt him too much moving forward. And his debut was such a memorable one that it’ll be easy to forgive the stumble if there are no further issues moving forward. 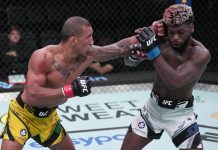