Another Georgian talent has been added to the UFC roster, and will debut against a fellow bright prospect.

Giorgi Kokiashvili of adjarasport.com was first to report the news that Zviad Lazishvili will be replacing Said Nurmagomedov at UFC Fight Night: Brunson vs. Till and will be fighting Jack Shore. A source close to the situation later confirmed the fight to Cageside Press.

Shore (14-0) went to the judge’s scorecards for the first time in his career in his last fight against Hunter Azure, winning a split decision. In his second fight inside the octagon and only bout in 2020, he submitted Aaron Phillips at UFC Fight Night: Kattar vs. Ige on ‘Fight Island.’

Lazishvili (12-0) was most recently in action last September when he beat Ricky Steele and won the LFA Vacant Bantamweight Championship. The Georgian will be the latest LFA bantamweight champion to move to the UFC, following Miles Jones, Casey Kenney, and Ricky Simon. 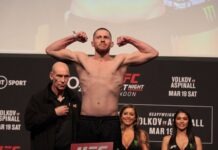