Nick Newell is in the spotlight for a different reason this week.

The Bellator MMA fighter, who previously competed for the WSOF and appeared on Dana White’s Contender Series, sees his life story immortalized in Notorious Nick, a Lionsgate production being released Friday, August 6.

“You don’t think about stuff like that. I wasn’t like ‘I’m going to fight, and one day they’ll make a movie about me.’ That’s crazy!” Newell exclaimed in an exclusive interview with Cageside Press on the film’s premiere day. “Who thinks like that?””

Yet here we are. Mark DiSalle, who produced and directed the original Kickboxer, and also produced another big Jean-Claude Van Damme hit, Bloodsport, along with partner Howard Burd (Mother’s Day), approached Newell about the idea of putting his life on screen.

“They met with me, and we hit it off. We met with some writers, and made a script.” For Newell, like many other kids in the 80s and 90s, Bloodsport and Kickboxer were “the movies if you were into martial arts. Me as a kid, watching those movies, [they] were so iconic. So it was all things come full circle. It was really cool to work with the team behind that.”

“It was important to me to have an actor that’s not only talented, but has something to prove, and I think Cody was the right guy for the job,” said Newell, who says the leading man “gave a good, strong, emotional performance.”

For MMA fans worried about the actual fighting in the movie, Newell gave his stamp of approval. Yves Edwards and Alex Munoz appear in the film. “You have real fighters that he’s going against, so it’s easy to look good when you have good, talented fighters in it.”

As for his favorite scene, “I really loved all the parts with Abi. He was a really important person to me, so the fact that they paid tribute to him was really cool,” said Newell. Abi Mestre, a friend and teammate of Newell, was tragically killed in a motorcycle accident just as his own MMA career was about to take off. On film, Abi is portrayed by relative newcomer Cameron James Matthews.

Of course, the hook to the movie is Newell’s story of overcoming the odds. A congenital amputee, Newell is missing his left hand. Which makes his career in mixed martial arts, arguably the toughest sport on the planet, something special. Certainly different — though Newell has never been one to present himself as anything more than a fighter.

“I embraced the fact that I’m different a long time ago. It’s a part of who I am, it’s not who I am. It doesn’t define who I am,” Newell explained. “There’s much more to me than just the fact that I’m missing a hand, and there’s a lot more to my character and me as a person. But it is something that sticks out, it is something that makes me unique.”

“Honestly, everyone’s facing obstacles, everyone has their adversity that they face in their life, and you can see mine. So I feel it makes me relatable to people, whether they have both hands, one hand, no hands, whatever. We’re all facing something.”

“I don’t run away from the fact that that’s how I was born,” he added.

It’s that overcoming the odds theme that should connect with audiences. “I think it’s a movie that will have a lot of long-term success,” said Newell, who believes that word of mouth on the film will be strong. “It’s not cheesy, that’s what I can tell you.”

Notorious Nick is available now via Video on Demand, with a DVD release planned for Tuesday, August 17. 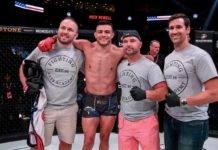