There was only one problem: he wanted the fight to go longer.

Nurmagomedov (13-0) finished the fight after landing a nasty-looking knee to the body of his opponent. Muro hit the floor, Nurmagomedov, cousin of former UFC champ Khabib, hit the GO button, and rained down the ground n’ pound until the ref waved it off.

His original plan? To fight longer. “I wanted to show people that I can wrestle as well, that I have grappling, and to make a statement that I’m not only a striking guy,” Nurmagomedov told media outlets including Cageside Press following the fight. “That’s why I was trying to fight a little longer.”

With his second win in the promotion being his highest-profile yet, Nurmagomedov, who trains under his cousin and AKA head coach Javier Mendez, can now look ahead to what’s next. In particular, he’s eyeing the promotion’s inaugural trip to Russia, which will feature the legendary Fedor Emelianenko.

“I hope in Moscow in October,” Nurmagomedov said when asked when he wants to fight next. As to an opponent, “anyone, I don’t care.”

The Dagestani contingent at Bellator 263 did very well Saturday. Islam Mamedov and Gadzhi Rabadanov both picked up wins. “It was a huge night for our team, for our country,” noted Nurmagomedov. “I’m very happy that we got the opportunity to fight together on the same card. It helps a lot, because we can prepare together, we can do the camp together. It works for me as motivation, but it gives me a little pressure as well. Mostly it motivates me.”

Being the last fighter on the team to fight did add a little pressure, the 23-year old admitted. “To be honest, it gave me a little pressure, because I was the last one, and all my teammates, all my countrymen won already, and I didn’t want to break this celebration.” 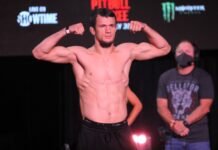