Ultimate Fighter veteran Chris Gruetzemacher, a longtime training partner of Benson Henderson, returned to the octagon on Saturday at UFC Vegas 33. Looking to shake off a loss to Alexander Hernandez last October, Gruetzemacher was up against Combate Americas vet Rafa Garcia.

Former Combate champ Garcia had been a short-notice fighter against the established Nasrat Haqparast in his debut, and had been 12-0 prior to it. Saturday in Las Vegas, he was looking to show MMA fans why he’d been so highly touted prior to this arrival in the UFC.

Gruetzemacher looked to close the distance early on trying to get a hold of Garcia. However, on one of the early attempts he ate a heavy hand that stunned him momentarily. Garcia pounced and knocked him down. He then tried to finish Gruetzemacher as he worked back to his feet. Gruetzemacher survived and seemed to shake out the cobwebs. Garcia landed a few more times before scoring a short lived takedown. In an exchange of knees on the feet, Garcia took two below the belt, prompting a short break. Gruetzemacher then started landing a bit more with his hands. Garcia countered with a few takedown attempts that led to little more than tie-ups against the cage. Gruetzemacher landed a few nice body shots to end the round, but the big damage was done early by Garcia.

Gruetzemacher looked much more fresh to kick off the second round. He cranked up the pressure to 10 and was working big with the body shots. Garcia then hit a well-timed takedown right into side control. He held Gruetzemacher there for a bit, but Gruetzemacher worked back up, fighting off a guillotine in the process. Garcia had some moments of working Gruetzemacher up against the cage, but the story of this round was the forward pressure and sheer volume from Gruetzemacher.

More of the same from Gruetzemacher, who appeared to be looking for a finish to kick off the third. A big upper cut landed for Gruetzemacher and he was just walking Garcia down. However, Garcia then landed another takedown and worked right to side control again. Garcia looked less offensive this time on the ground and appeared to be very focused on keeping Gruetzemacher down. Referee Chris Tognoni warned Garcia to stay active and that prompted him to try to land a bit more in terms of strikes. With that Gruetzemacher made it back to his feet and the two went toe-to-toe with wild strikes. When Gruetzemacher started getting the better of it, Garcia worked another takedown, this one to a butterfly guard. With 10 seconds left, Gruetzemacher made it back to his feet. Garcia snagged a leg for one more takedown, but the round ended there. 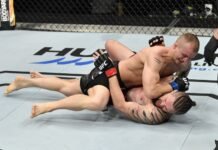 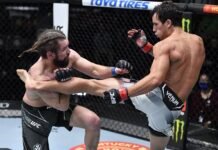 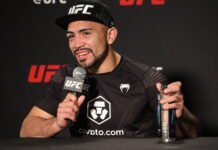