Welcome to one of the most entertaining fight build-ups in recent memory. Costa rep’s Reese’s, as a candy connoisseur. Upcoming opponent Adrian Yanez is a Dr. Pepper fanatic. It’s candy versus soda, and the back-and-forth has taken on a life of its own on social media.

Costa admitted Wednesday that it’s a bit annoying to see Reese’s posts all over his social media timeline while cutting weight, but in the same breath, “I did it to myself, so I really can’t talk sh*t.”

“This whole thing is so much fun. I haven’t had a fight where, it’s getting as much attention as it is on social media,” he noted, adding “It’s really cool, man, I’m really enjoying it. I think we’re both complimenting each other in the personalities that we’re bringing, we’re both growing our stocks, and we get to settle everything on Saturday night and mix it up. The whole build-up has been so much fun.”

There’s also a lesson to be learned from the candy versus soda wars. “I think with the way that Adrian and I have handled this whole thing, I think it kind of shows that you can get people super hyped up for a fistfight, but neither side is talking sh*t about either side. His fans aren’t talking sh*t to my fans, everybody is cordial and everybody is just arguing over f*cking junk food.”

As a fighter who believes mixed martial arts is built on respect, Costa is happy to see the positive approach to fight promotion play out. “You’ve seen it far too often where guys are stepping outside of that line, talking sh*t about family, religion, and pushing each other— it’s all stupid. We’re going to fight anyway. I don’t care if I’m mad at you or I’m happy with you, we’re going to fight on Saturday night, that’s what we’re here to do. Let’s make this funny, let’s try to bring some positivity to it, let’s bring some positive light to the sport.” That’s an approach Costa plans to take in all of his future fights — to build them up with positivity. “You’re not not going to hear me talking sh*t about anybody.”

The New England-area fighter knows he has a tough match-up with Adrian Yanez, of course. “He’s a beast dude. You’re not going to hear me saying anything negative about Adrian’s technique or the way he fights or anything like that. I’m a fan of him,” admitted Costa. “I was watching his Contender fight, I was a fan, during his last fight, I was watching, I was talking to my girlfriend, I was talking like ‘this kid is f*cking fun, he’s nasty, he looks exactly like [Jorge] Masvidal, what’s going on?’ I’m just excited to mix it up with him. It’s going to be a fun fight, I have a ton of respect for him, I know how good he is, and I’m sure he knows how good who I am.”

He’s also ready to 15 minutes for the first time in his career, if necessary. “Yeah man, everybody’s so quick to be like ‘aw he can only do this, he can only do that, he’s just a pretty [face]’ — Say it. It doesn’t really matter. I know the work that I’ve done,” stated Costa. “I like having the role of a unicorn. You’re still not really sure what I’m capable of, what I can do. There’s still a lot of ‘what ifs,’ like ‘what is his capability?’ I like to keep it that way. We want to have as minimal footage as possible.”

So will it goes the distance, or end early? Costa didn’t exactly say. Just expect a good fight. “One of us is either snoozing, or we’re both going to be hurting after fifteen minutes.” 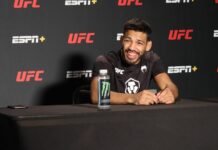